Where Does The Time Go?

Was about to circulate one of my patented Sionne’s Spammy Mass Emails today - or what I really prefer to call an informative update to an intimate group of selected contacts - and remembered what my friend Malcolm would likely tell me, “Uh, excuse me but please stop stuffing my in-box with the kind of info and commentary you are supposed to be posting on your near-dormant blog, dude.” …which is exactly right.

Will spare you the latest litany of excuses as to why Posts By Sionne deserves its ranking as one of the leading Cobweb-Gathering Locations On The InterWeb but suffice it to say it is proof of the fact I lead an extremely rich and full life, which consists of basically the following schedule on a daily basis:

door with me and dropped off at daycare, going into work, working all day, coming home from work and starting the Second Shift ie. assisting my wife in throwing some food at our children, getting pyjamas on them and continually chasing them back into bed for about an hour after their supposed bedtime and then doing some more exciting grown-up stuff like cleaning up supper mess, paying bills and walking the dogs followed by catching up on daytime workload overflow and then getting a few hours of sleep…phew. Weekends are not as intense as weekdays but still consumed with buying groceries, usual household repairs and yard work, never-ending laundry piles, various children-focused activities, etc.

While I have never actually been a little mouse running on a wheel, over recent months I can well imagine exactly what that experience feels like. Don’t get me wrong though - life is good overall and no regrets, just the reality of limited time cycles in the past year or so, where blogging falls on the could-do side of the ledger versus the must-do side for me.

So a bit of a departure format-wise this time. Instead of working from a single theme my objective here is to simply get some of these items finally published instead of continuing to have them roll around in my head for weeks on end. So, in no particular order:

> A big shout-out to my friend Andris Pone of Instinct Brand Equity, whose article criticizing Bell Canada’s inability to deliver on its (re)brand promise was featured in the October issue of Marketing Magazine. Check out the article here because I tend to nod my head along with nearly everything Andris and his colleagues at Instinct Brand Equity have to say. Their criticisms and insights are always spot-on…these guys really get it.

> It was announced earlier this week that Jerry Yang is stepping down as Yahoo! CEO and will be reclaiming his former title of Chief Yahoo, reverting to a more strategic role as soon as Jerry’s successor is named. Not really any surprise here but my biggest question is “what comes next?” as this move only reinforces the fact that Yahoo! has been lacking a true get-it-done CEO since the beginning of the Terry Semel era, and what a debacle Mr Hollywood’s tenure turned out to be, huh? Kinda hard to run a leading Silicon Valley-based Web Media company when you fly up from LA once a week and don’t even read emails on your computer but instead have them printed out (!) by your executive assistant.

Don’t get me wrong. Even though they are direct competitor to my employer I am far from a Yahoo! hater and in fact have a long-time affinity for what I consider to still be a leading global online brand. What would make me - and thousands of the company’s employees and shareholders, etc - happiest is for Team Purple to get their sh*t together and develop a clear and focused strategic plan, and then execute against it, before the executive exodus becomes irreversible and/or MSFT makes another bid. With the current economic downturn to navigate through and associated declines in advertising budgets the Yahoo! challenge will be difficult enough without any new Peanut Butter Manifesto-related issues compounding their problems.

Am really hoping for a number of reasons that Yahoo! can get lean and hungry before the 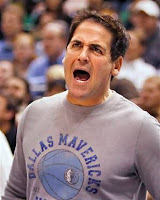 entire train comes off the rails for them. From that point of view, Jerry Yang’s relinquishing the CEO role now is a good step in right direction. My favourite comment on this whole situation was one I read recently from the ever-quotable Mark Cuban, where he said "Jerry's too nice a guy. He cares too much. They've got a lot of avenues they could take but all of them depend on being a lot meaner and a lot more aggressive and that's just not their style." The article where Cuban was quoted goes on to say “Cuban should know - he took Yang for $6 billion during the dotcom bubble by selling Broadcast.com to Yahoo, then made sure to collar his shares so they kept their value while Yang's fortune plunged. Never heard of Broadcast.com? Exactly Cuban's point.” which while entirely true also made me laugh out loud. A sweet play by Cuban but gotta love that ValleyWag attitude in describing a classic dotcom-era transaction…

> Finally, I came across the Search Marketing Fact Pack 2008 in Advertising Age and found it really interesting, despite the definite US-market emphasis. Even though I have a new role in my day job and therefore tend not to focus as much on the Search space as I did previously, it holds enough personal interest for me to dig into this stuff any chance I get. Some good info on Keywords and Buying Words, the usual on Analytics as well as solid coverage of Local and Mobile, two areas I have been following much more closely lately. Take a look at the full report for yourself here if you want to know more.

There you go and hope you enjoyed this one. And even though I am “cashing in some credits” (you married dudes know what I mean) and getting out of the house tonight - going to the Ad Club Holiday Party event, after also attending Mobifest yesterday evening - I will see if I can follow up in the not-too-distant future with another update…or at least by sometime before Christmas. I am really not kidding here, OK?
Posted by Sionne Roberts at 12:31 PM No comments:

Who Is This Guy?

Sionne Roberts
I am an experienced Online Marketing Strategist and Sales Development Executive, Dotcom Startup Veteran, Proud Parent, Dog Owner, Poker Player and basically an All-Around Nice Guy. Link through to my Profile page to see how you can reach me. DISCLAIMER: all opinions expressed here are entirely my own personal views and not those of my employer.